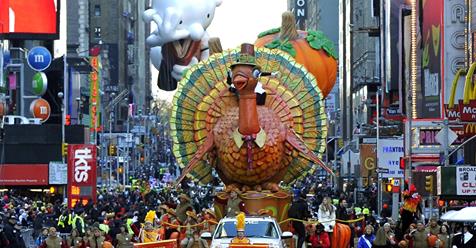 Thanksgiving Day parade. As the United States prospered during the Roaring Twenties, so did New York City’s iconic department store—Macy’s. After going public in 1922, R. H. Macy & Co. started to acquire competitors and open regional locations. Macy’s flagship store in Manhattan’s Herald Square did such a brisk business that it expanded in 1924 to cover an entire city block stretching from Broadway to Seventh Avenue along 34th Street.

To showcase the opening of the “World’s Largest Store” and its 1 million square feet of retail space at the start of the busy holiday shopping season, Macy’s decided to throw New York a parade on Thanksgiving morning. In spite of its timing, the parade was not actually about Thanksgiving at all but the next major holiday on the calendar—Christmas. Macy’s hoped its “Christmas Parade” would whet the appetites of consumers for a holiday shopping feast.

Find out the history.